The following short history of Bethany Congregation and the growth and development of Bethany Lutheran Primary School will provide for you some background on our school.

Bethany Lutheran Congregation, Raceview, began in 1970. From its very beginning, the congregation chose to have a commitment to an education ministry with children. A thriving Sunday school was quickly established.

In 1975, a committee was formed to study and plan for the establishment of a Lutheran Primary School. During 1976, the congregation enthusiastically purchased 4.2 hectares of land. Application was then made to the Ipswich City Council for rezoning. Fundraising and physical preparation followed.

In 1981 Bethany Congregation formally made the decision to commence its school in 1982. The facilities, which had been provided by the congregation since 1970, made this decision possible. The church itself was dedicated and a tennis court provided in 1971; the manse in 1973; an Air Force hut for use as a hall in 1975 and a toilet block in 1981.

On Sunday January 31st 1982 a service to dedicate Bethany Lutheran Primary School was held. Mr. Maurice Schuller was installed as Principal and Mrs. Elizabeth Johnston as Teacher. Two days later classes began in the church hall. Thirty-six children in seven grades were present as foundation pupils. During the year the number grew to forty-three.

Bethany Lutheran Primary School continued to grow steadily during the ensuing years. In 1987 the school numbered 178 students and at the commencement of that year the principal was released from classroom teaching to take up fulltime administrative duties. By 1991, the school had reached capacity with an enrolment of 212 students in 7 grades.

On October 31st, 1993, Bethany Congregation officially dedicated and opened the new Worship Centre. This valuable facility for ministry to the church and school community was built over a period of 18 months by voluntary labour, utilizing the skills of congregation and school families.

In November 1995, we officially opened a new classroom, which was built by our school community in second semester. The aim of this project was to increase the size of our previous Library area to take up a full double teaching unit. We also purchased hardware and software to begin the process of automating the Library.

1996 saw the development of the Schuller Playground and the building of a double garage to use as a sports shed. The school residence, which was no longer required for principal housing, was made available for school use. A computer lab was set up with 15 leased computers and 3 printers, and the special education area was relocated from the church meeting room.

In 1997, the Gaydan Freiberg Active Track was built and the school purchased a new 33-seater bus with seat belts to use for camps, excursions and to support our sporting program.

With the growth of surrounding P-12 schools and the advent of Middle Schooling, Bethany experienced a decline in enrolments over the next few years. Enrolments also suffered from lack of a secondary level for Bethany to feed into directly. It was realised at that time that to address the situation we would need to offer something special to retain our students. Opportunity arose in 2001 when we applied to Lutheran Education Queensland to become a Focus School. After researching alternative methods of curriculum delivery, our school moved into Stage-Based Education using an Integrated Program with targeted Journey Groups in Literacy and Numeracy. The program was demanding for staff at the implementation phase with a great deal of work being done to map the curriculum and develop Integrated Units of work. However, the change in achievement and the nature and tone of the school was significant. Enrolments again began to increase.

In 2005 we were able once again to increase our teaching staff to our previous level of 8 classroom teachers. This then took our Stage Based Program to a full stream with each Stage having two Home Group teachers working together and supporting one another in planning and delivering the curriculum. At this point our school community and the School Board grappled with the problems our original buildings were encountering due to the black soil. Specialist reports were sought and the decision made that the school needed to be rebuilt.

5 new modular buildings were purchased and placed on site in readiness for the 2005 school year. Three of the rooms catered for the Junior Stage during the rebuilding of their permanent classrooms and the other two housed Stage Three. The new classrooms, including a new Preschool were available for occupation at the beginning of Term 3 2006. The shift to the new rooms took place during the vacation break and Stage 2 and the Library were relocated into the modular buildings. The 2 double classroom units used by the upper school were then demolished to allow preparation for Stage 2 of the Building Redevelopment Program to begin. By the beginning of Term 4 the project had commenced.

The classroom built in 1995 became the temporary Preschool in 2006 until the new Preschool classroom was ready for use in the second part of the year. At the beginning of 2007 the classroom vacated became our new computer lab, outfitted with 16 new P4 computers. The relocation of the Preschool located the preschool children alongside the Junior Stage 1 class in readiness for the introduction of Prep in 2007.

During 2006/2007, Prue Walsh, an environmental and play consultant assisted with the development of new playground facilities. A Master Plan was drawn and grants sought. Also in 2006 with the help of the school the Parish made application to start a Kindergarten in the former Preschool building under the old church. The application was successful and the Kindergarten commenced under the QLECS umbrella at the beginning of 2007. The one unit Kindergarten is a wonderful feeder to the school and currently has enough on the waiting list to warrant adding another unit.

At the end of Term 3 2009, under the Building Education Revolution, the Administration building and the computer laboratory built by voluntary labour in 1995 were demolished. A Library including a Learning Plaza, teaching area, stacks, storage, a presentation area, a reading area and a kitchenette and toilet area was constructed. The Library Hub with Learning Plaza was officially opened on 4th June 2010. A new boys’ toilet block was constructed through Mr. Rudd’s Pride Package and the original amenities upgraded for the junior and senior girls. This project was very exciting and has been a great blessing to our school community.

In 2011, our school building program continued with the construction of a new Administration Centre. The building was officially opened on the 30th May 2012. This completed the rebuilding program that commenced at the start of 2005, with the placement of the 5 modular buildings and vacating the Junior Primary classrooms in readiness for demolition.

The school continues to change and grow, with a new multi-purpose building scheduled for completion in early 2019. 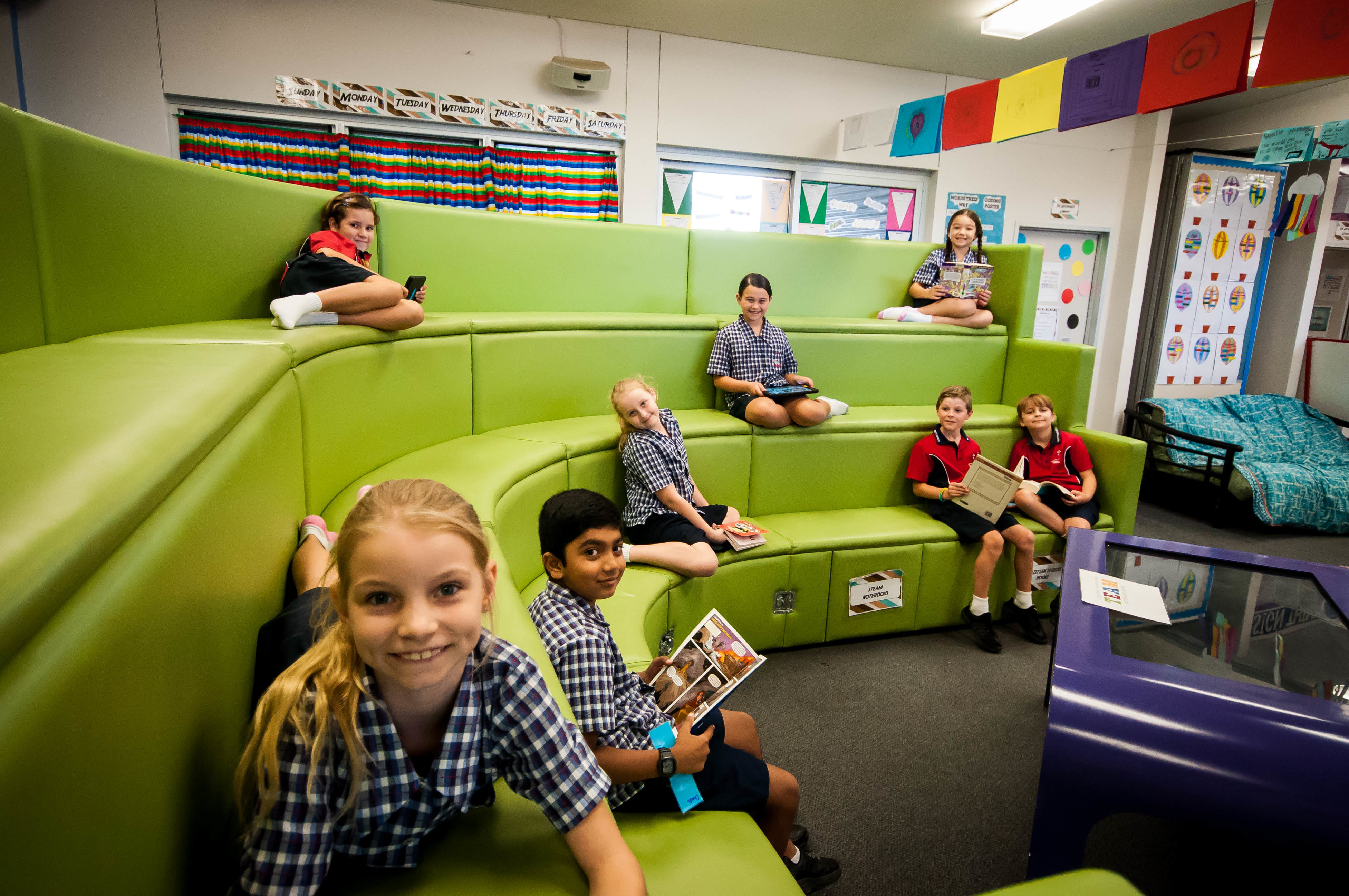